Angostura home is located on a 20-acre complex in the heart of the Caribbean, off the coast of Venezuela, on the island of Trinidad, if known to the joy of life and the meaning of the feast of its inhabitants. This complex includes distilleries offices but also a museum, art gallery, an auditorium and a store of wines and spirits group. 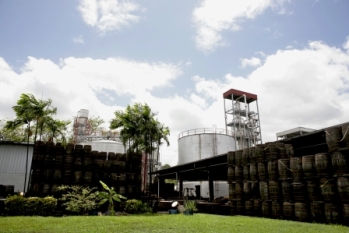 HISTORY
Creator of a bitter enjoyed for nearly two centuries by all the bartenders society Angostura was then launched on the rum market, at first only for bottling the production of other distilleries. After several years of intensive research on methods of fermentation and distillation, the company settled in 1945 on the island of Tobago Trinidat and a distillery at the forefront of modernity, thus becoming able to produce rum on a large scale.
In the late sixties, the company had expanded its distribution network in over 140 countries, gaining international stature for quality rums, in addition to its bitters. In recent years, Angostura has doubled its storage capacity and distillation in Trinidad with average production volumes which increased from 1.3 million liters in 1960 to 20 million liters in 1998.
At the beginning of the twenty-first century, the ability to rectify reached 50 million liters. More than 95% of production is exported around the world. 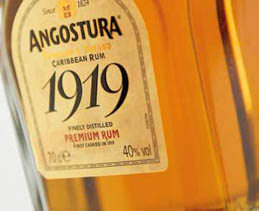 SPECIFICATIONS
If Angostura has largely developed around the production of light rum market especially for the United States, it is not limited, unlike its main competitor, this single range. She has developed well in Trinidad over thirty different qualities, including many high quality aged rums. The company exports its rums in more than 140 countries worldwide.

PRODUCTS
Among the Angostura rums are mainly distributed in France 3 years at 37 °, colorless concentrated around aromas of vanilla, the 5 years in bourbon casks, the spicy character, the 7 years (minimum age for assembly) , woody notes recorded by the bitter cocoa and vanilla, the 1919 (8 years minimum) sweet and very rounded, with fine notes of hazelnut and toast, the 1824 (a blend of rums aged 12 and older) very round with notes of honey, fruit and chocolate.
http://www.dugas.fr/l-archipel-des-rhums/les-rhumeries/distillerie-angostura.html
Our brands